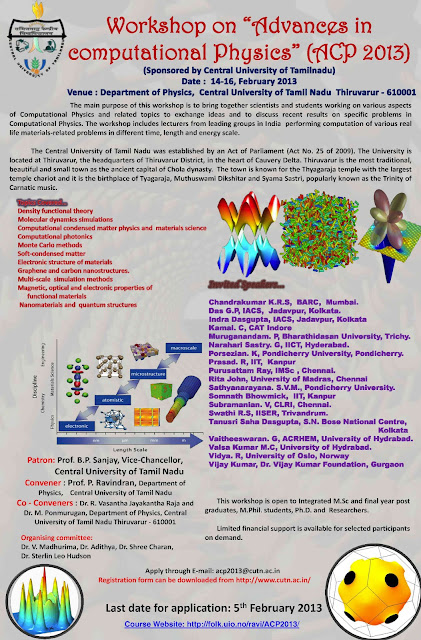 Wish You A Happy Republic Day 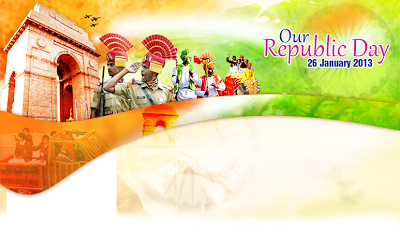 Each year, 26th January is a day on which every Indian heart fills up with patriotic fervour and immense love for motherland. There are many significant memories as it was this day when the Indian Tricolour was first unfurled in January 1930 at Lahore, by Pt Jawaharlal Nehru and the declaration of an independent Indian National Congress was made.

Republic Day reminds us of the hard work and challenges which our forefathers faced to make this country a Sovereign Democratic Republic. This day evokes a feeling of patriotism in the heart of every Indian.

26th January, 1950 was the day when the Indian republic and its constitution came into force. It was this day in history in 1965 when Hindi was declared as the official language of India.

Though India became a free nation on August 15, 1947, it declared itself a Sovereign, Democratic and Republic state with the adoption of the Constitution on January 26, 1950.
A salute of 21 guns and the unfurling of the Indian National Flag by Dr. Rajendra Prasad heralded the historic birth of the Indian Republic on that day. Thereafter 26th of January was decreed a national holiday and was recognised as the Republic Day of India.


The Constitution gave the citizens of India the power to choose their own government and paved the way for democracy. Dr. Rajendra Prasad took oath as the first President of India at the Durbar Hall in Government House and this was followed by the Presidential drive along a five-mile route to the Irwin Stadium, where he unfurled the National Flag. 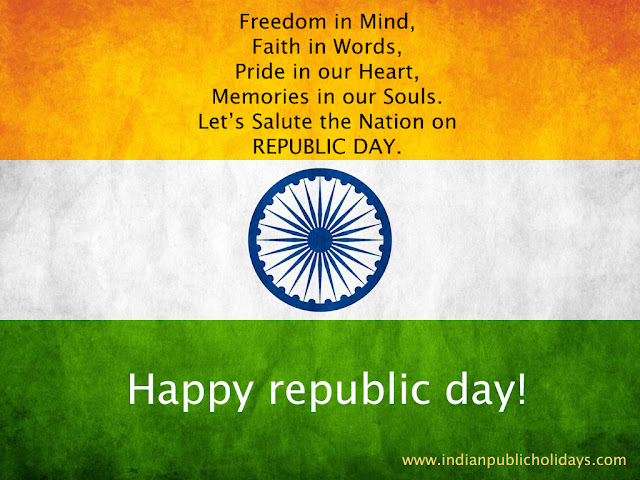 63 years back, a salute of 21 guns and the unfurling of the Indian National flag by Dr. Rajendra Prasad heralded the historic birth of the Indian Republic on January 26, 1950; 894 days after our country became a dominion following withdrawal of British Rule. Since then, every year the day is celebrated with great pride and happiness all over the nation.

The transition of India from a British colony to a sovereign, secular, and democratic nation was indeed historical. It was a long journey of around two decades that started with the conceptualisation of the dream in 1930 to its actual realization in 1950. A look into the journey that led to the birth of Indian Republic will make our celebrations more meaningful.

The seeds of a republican nation were sowed at the Lahore session of the Indian National Congress at the midnight of 31st December 1929. The session was held under the presidency of Pt. Jawarhar Lal Nehru. Those present in the meeting took a pledge to mark January 26 as "Independence Day" in order to march towards realizing the dream of complete independence from the British. The Lahore Session paved way to the Civil Disobedience movement. It was decided that January 26, 1930 would be observed as the Purna Swaraj (complete Independence) Day. Many Indian political parties and Indian revolutionaries from all over the country united to observe the day with honour and pride.

The Indian Constituent Assembly, which was constituted as a result of the negotiations between the Indian leaders and members of the British Cabinet Mission, had its first meeting on December 9, 1946. The Objective of the Assembly was to give India a constitution, which would serve a lasting purpose and hence appointed a number of committees to thoroughly research the various aspects of the proposed constitution. The recommendations were discussed, debated and revised many times before the Indian Constitution was finalized and officially adopted three years later on November 26, 1949.

Though India became a free nation on August 15, 1947, it enjoyed the true spirit of Independence on January 26, 1950 when the Constitution of India finally came into force. The Constitution gave the citizens of India the power to govern themselves by choosing their own government. Dr. Rajendra Prasad, took oath as the first President of India at the Durbar Hall in the Government House and this was followed by the Presidential drive along a five-mile route to the Irwin Stadium, where he unfurled the National Flag.
Ever since the historic day, January 26 is celebrated with festivities and patriotic fervor all around the country. The day owes its importance to the constitution of India that was adopted on this day. On this Republic Day, read what the great Constitution of India, that propounds liberal democracy, has in its store. Let's also feel proud in pronouncing what the Preamble to our Constitution  says. 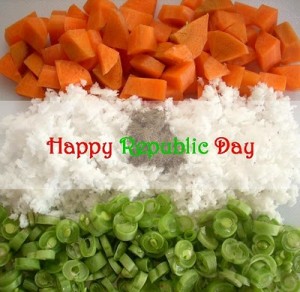 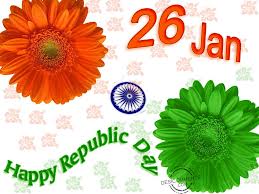 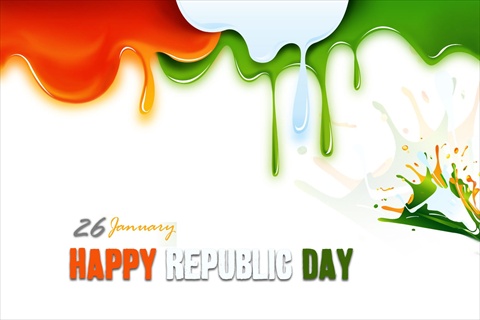 Remembering all the great men
Who stand as the backbone of
This Independent country!!
Spread the Message of Love
And Peace on this Republic Day

Saluting all great men
Who contributed in building a
Successful constitution
Warm Wishes on the Republic Day
Vande Matram!!

Saluting all great men
Who contributed in building a
Successful constitution
Warm Wishes on the Republic Day
Vande Matram !! 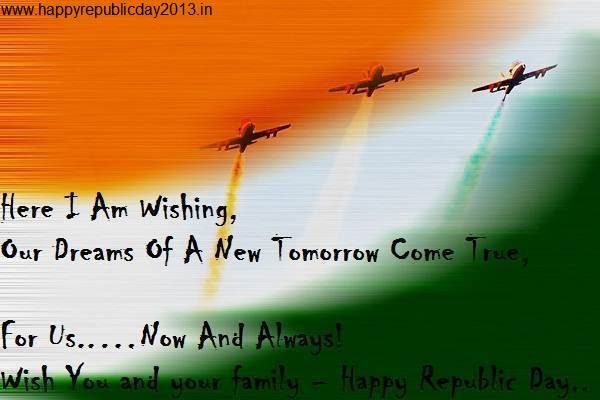 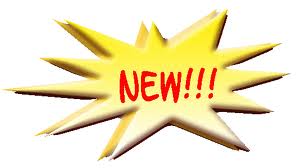 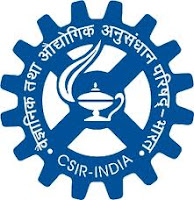 NIT-OSA and NITT-SPIE Student Chapters, Department of Physics invites you to attend "National Conference on Advanced Materials and Applications-NCAMA-2013" to be held at Department of Physics, National Institute of Technology (NIT) Tiruchirappalli, Tamilnadu on 4th and 5th April 2013.
Objective of NCAMA-2013 is to provide a platform for the research students in the various fields of material research to showcase their research work and to have active interaction. The multidisciplinary features of contemporary research have caused a necessity for active interaction between the applied and basic researchers, technologists and industrialists. This event will strengthen the collaborative efforts of young researchers in broadening their horizons in their respective fields and develop more insight by listening to and interacting with invited lectures by experts in the area. The conference program will have invited lectures by the eminent scientists, oral and poster presentations on the latest developments in the wide area of current research. Thus, it is expected to have good interactions and knowledge sharing. We hope that this conference will bring fruitful results to the scientific community.
We welcome you to all to this historical city of Tiruchirappalli which represents the heritage, legacy and hospitable people, who will be delighted to welcome you here and will ensure your stay rememberable. You will find here many beautiful historical signatures like The Rock Fort temple, Srirangam Temple, Kallanai dam etc. 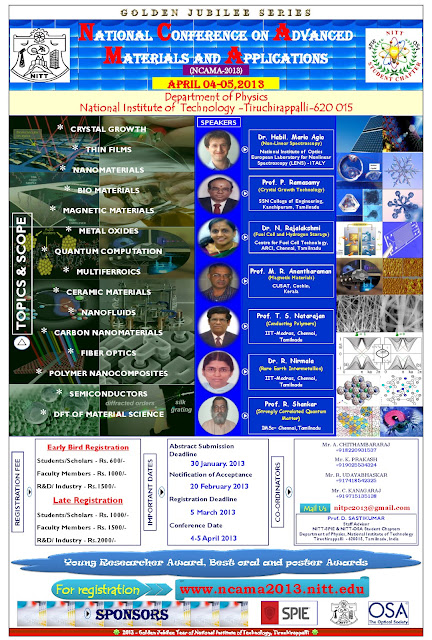 Email ThisBlogThis!Share to TwitterShare to FacebookShare to Pinterest
Labels: Conference

Innovation in Scientific Pursuit for Inspired Research (INSPIRE), A SCHEME OF THE GOVERNMENT OF INDIA, OFFERS STANDING OPPORTUNITY FOR PURSUING DOCTORAL RESEARCH IN ANY RECOGNIZED UNIVERSITY IN INDIA THROUGH FELLOWSHIPS AT THE LEVEL SAME AS NATIONAL ELIGIBILITY TEST (NET) QUALIFIED CANDIDATES.
Innovation in Science Pursuit for Inspired Research (INSPIRE) is a Program launched by the Government of India to strengthen the National Science and Technology base. It is being implemented by the Department of Science and Technology (DST). One Component of the AORC Scheme in INSPIRE is focused on attraction of student to pursue doctoral degree in basic and applied sciences including engineering, medicine, agriculture, veterinary, pharmacy etc. after either masters’ degree in science or bachelor/ masters’ degree in engineering/ applied sciences.

ELIGIBILITY:
i) INSPIRE Scholar having secured minimum 65% marks in aggregate at M.Sc. or Integrated M.S./ M.Sc.
ii) 1st Rank Holder in each Post-Graduate (PG) level examinations in Basic/ Applied Sciences including Engineering Sciences, Medical Sciences, Pharmaceutical Sciences, Agricultural sciences and Veterinary Sciences at the University and academic Institutions. Similarly, 1st Rank Holders at the Graduate Level Examination in Engineering Sciences and other professional courses conducted by a University/ Institution in India are also eligible to apply
for directly pursuing doctoral degree. These students shall also be eligible for admission to pursue research, leading to Ph.D. in any Indian University/ National Institute/ National Laboratories in India. 1st Rank Holder in College including Autonomous College Examination is not eligible. Candidates who are only Indian Citizen and have acquired their required qualifications
necessary for admission to the PhD program only during the last year or Current year are eligible. However, students who are already enjoying Senior Research Fellowship (SRF) or higher position in any project need not to apply for this.

AMOUNT, NUMBER & DURATION OF FELLOWSHIP:
It offers financial support in the form of a Fellowship equivalent to NET/ GATE fellowship (Junior Research Fellowship / Senior Research Fellowship) and research grant to the candidate. There is a provision of 1000 INSPIRE Fellowships every year to offer eligible students and each Fellowship is tenable for a maximum period of five years, subject to the completion of their PhD degree whichever is earlier. However, continuation of the Fellowship for once selected candidates is based on satisfactory performance certified by the institution as per stipulated GOI guidelines for such Fellowship.

SELECTION PROCEDURE:
Selection for INSPIRE Fellowship shall be purely on the basis of academic merit of the candidate, choice of the Supervisor, Host Institutions and the Research Proposal. All interested and eligible candidates must apply in the prescribed A4 size format along with documents as listed in the Annexure 1 to 4. Applications should be sent by Post only and shall be addressed to

The envelope should mention on top “Application for INSPIRE Fellowship – (give Subject Code)”.
This advertisement is also available at the website: www.inspire-dst.gov.in for
submission of application through out the year.

We are pleased to invite you to participate in the inaugural Asian International Conference on Surfaces, Coatings and Nanostructured Materials (NANOSMAT-Asia) to be held at the Ramada hotel in Wuhan, China during 13-15 March 2013.
NANOSMAT is an established name in Nanoscience and Nanotechnology conferences. The first ever NANOSMAT conference was organised and held in Portugal in 2005. NANOSMAT conferences provide a unique platform for discussing key aspects of materials-related Nanoscience and Nanotechnology.
Owing to the increasing level of participation in NANOSMAT by delegates from Asia, we are pleased to launch and host the inaugural NANOSMAT-Asia in 2013 at the Huazhong University of Science and Technology-HUST, on its main Campus in Wuhan, China. NANOSMAT-Asia will be a biennial event and it will attract delegates from academia, industry and research institutes to network, exchange ideas and gain new insights on the forefront of materials, processing and nanotechnology related applications. The event will also host an exhibition.

We would like to cordially invite you to take part and also contribute to the success of the NANOSMAT-Asia conference.
On behalf of the Organizing Committee, I look forward to seeing you in Wuhan and to an exciting and enjoyable conference.


SYMPOSIUM 2: STRUCTURE AND PROPERTIES OF NANOMATERIALS

For more info: www.nanosmat-asia.com
Posted by IDARAVINTHAN at 5:14:00 PM No comments:

Email ThisBlogThis!Share to TwitterShare to FacebookShare to Pinterest
Labels: Conference

Participants are paid a monthly stipend of Rs 7000/-, Sleeper class return railway fare and are provided with shared hostel accommodation. 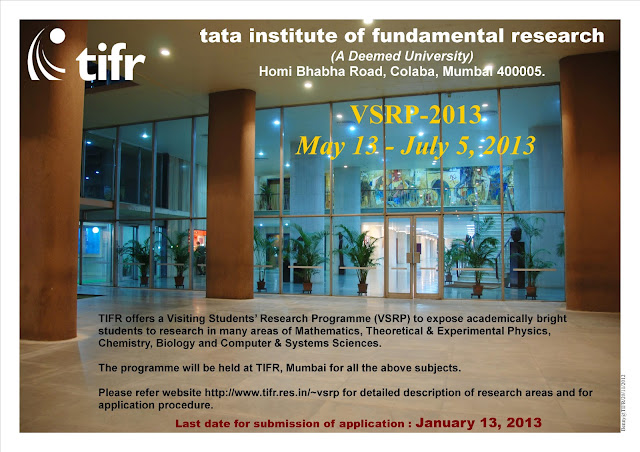 
Students are encouraged to apply online.

2. Students are required to fill in two areas of study in order of preference.  Please read the Information Brochure before you fill this section.

3. A write-up of 100 words describing your interest in the most preferred field of study is required to be uploaded (in .doc or .pdf format and file size not exceeding 1MB).

4. Names and email ids of two Referees who would be filling up the Referee Report Forms of the student.  They should be teachers or persons with whom you have interacted academically.

The link for downloading the Referee Report Forms will be sent by email to the applicant after complete registration.


Students from remote areas who do not have access to internet can send a request for application form along with a self-addressed stamped envelope of Rs 10/- to :

For Maths - February 17, 2013
For all other subjects - January 13, 2013.
Referee Reports of applicants submitting online applications will be accepted till one week after the last date.